buildsheet
The buildsheet blog is a forum to exchange Corvette and/or any GMAD buildsheet knowledge
Categories:
Archives:
Meta:
June 2013
06/17/13
Why does it (study guide) start with 1973?
Filed under: General
Posted by: @ 3:28 am

Model year 1973 was the first year the GMAD buildsheet (General Motors Assembly Division) used the landscape style buildsheet for the Corvette. We know that 1973 was the year we see the GMAD manifest glued to gas tanks. Before 1973, Corvette assembly was under the management of the Chevrolet Motor Division.

Before 1973, the assembly plant used the Corvette Order Copy and copies were glued to the gas tank from 1967 through 1972. Year 1967 was first year build records were glued to Corvette gas tanks.

Auto Enthusiast picked up Corvette Buildsheet Book, introducing the the study guide for 1973-82 Corvette Enthusiasts. You can review its listing and comments reviewers have posted after getting their copy of this new book.

Great book !!! Details you won’t find just anywhere. Learn something new every time I crack this book open !!! Funny to find hidden clues from the past right on your own car !!! A must read book !!!

The most frequently asked question by Corvette enthusiasts but most find it on the tank. However, it never amazes the other places an owner will find a buildsheet. A few weeks ago, I heard from another owner and when I asked, he shared that he found it while tearing the interior of his 1979. He stated:

I found the build sheet for my car under the carpet in the back but it was for the wrong car!

I recall at an NCRS event at Lowe’s Motor Speedway, and the owner and I were going over the car when he reach underneath and retrieved an original, gear oil scented buildsheet from the strut bracket of his 1978 low-mileage Silver Anniversary Corvette.

I have concluded owners must have a genuine curiosity about their Corvette and be aware while doing routine maintenance, restoration or preservation that something may be hiding and they should proceed gingerly with their work.

comments (0)
Buildsheets Used by Other GM Divisions
Filed under: General
Posted by: @ 1:50 pm

Classic car owners have long had a curiosity in buildsheets and those familiar with build records, know that Pontiac was the first group to gain access to GM build records. While researching for the Study Guide, I discovered that members of Chevelle forums were quite knowledgeable about the GMAD landscape style manifest.

There were a number of Chevelle plants in the 1960s versus one Corvette plant. The first Chevelle plant to adopt the GMAD manifest was the Fremont CA plant in 1965. By the early seventies, all Chevelle plants had transited to the landscape format. The push was the transition of plant management from the Chevrolet Motor Division to the General Motors Assembly Division or GMAD.

A quick visit to other Chevrolet brand forums reveal a variety of buildsheet formats were used in the late 1960s and early 1970s. Along the way, we will incorporate what we learn from other forums about their unique buildsheets.

Welcome to The Buildsheet blog! This is its first post and is intended to help General Motors owners of a Classic vehicle (ie, Corvette) that used the manifest or buildsheet and seek information about what they found.

It also builds on the knowledge provided through the Corvette Buildsheet Book: A Study Guide to 1973-82 Build Records that chronicles the use of the GMAD (General Motors Acceptance Division) manifest in the St Louis Corvette Assembly plant. 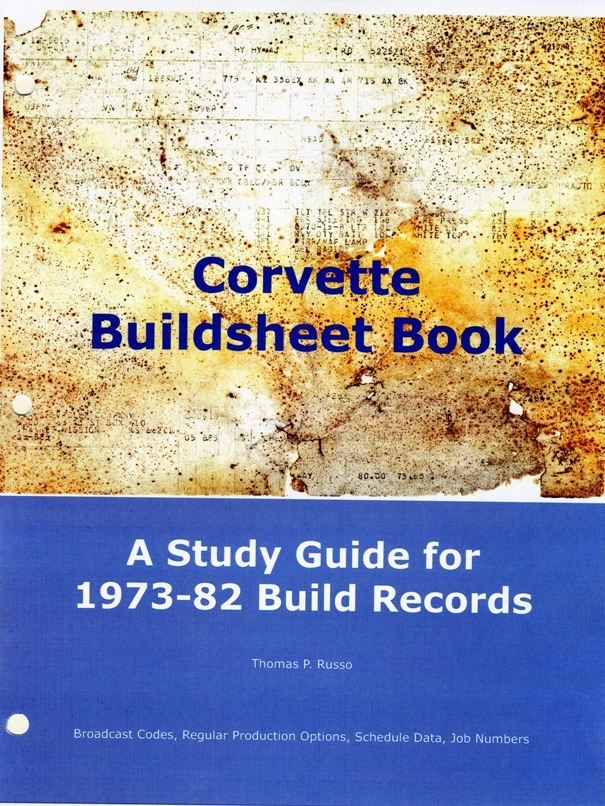